Polk County is a region rich in history, and with that history is mystery, even horror! Many places throughout the county are purportedly haunted. The Ghost Girls of Lake Wales have more than 1000 hours of paranormal investigative experience and have much knowledge about Polk’s haunted history.

Built in 1926, the Dixie Walesbilt Hotel, now known as the Grand Hotel, has provided accommodations to countless guests. But even as it stands vacant today, many guests still remain — for though many have checked in during this life, some never checked out.

Disembodied screams, voices, and footsteps have been heard inside, especially on the second floor ballroom. Receptionists working late have reported hearing noises from upstairs, though when security guards were called to investigate, they found nothing.

The building has been a popular suicide location, as many have jumped from the rooftop to their deaths. One maintenance worker in the 1920s committed suicide in the basement after checking into a hotel room, purchasing rope from a store across the street, and using the rope to hang himself.

The hotel was also a rumored hotspot for mob activity, as it provided a meeting place between each coast. Even Al Capone was rumored to have stayed there.

An Italian lawyer who worked at the hotel committed suicide after killing the mayor in a heated disagreement. His spirit has been heard walking the halls and seen peering out of his office window. Visitors have claimed to have been followed by a shadowy figure that is supposedly him.

During the 1930s, a serial killer allegedly resided in the hotel and killed four to five women. One of his alleged victims, a woman dressed in yellow, can be seen at night standing on the hotel balcony holding her face in her hands and crying.

The most famous ghost is the “Lady in Blue,” a woman with long dark hair wearing a blue dress. She has been seen floating from the top of the building and hovering toward the ground below before disappearing into the hotel.

The local paranormal group, Ghost Girls Inc., regularly holds ghost tours in Historic Downtown, with the Grand Hotel as their main attraction. They have also conducted investigations around the building, where they have detected activity such as disembodied voices and spectral digital images.

During some of their late night tours, they will allow guests to use their equipment, such as clear thermal imagers, which detect and display heat waves.

The Old Courthouse (now the Polk County Historical Museum and Genealogical Library) housed the trials and executions of Polk County’s most notorious criminals, many of whom haunt the building and surrounding grounds.

The two most infamous outlaws were the Mann brothers, who killed Sheriff Silas Campbell outside the courthouse in 1883. So despised were they that after being lynched by a mob three years later, their corpses were placed on display inside the courthouse.

It’s been reported that the ghosts of the Mann brothers have been seen hanging from the tree where they were hung, and even walking inside the courthouse and the streets outside. In the room where their bodies were displayed, visitors have reported being touched when no one else was there, and being overwhelmed with great despair.

The brothers are said to roam the courthouse seeking mercy for their crimes, according to a booklet distributed by the Bartow Historical Society during the few ghost tours held there.

The booklet claims: “Doubtless they knew the identities of the leaders and members of the mob and still look for one citizen who might grant them mercy.”

Other criminals supposedly haunting the courthouse include a gang of mobsters who were tried and hanged for murdering a judge and his wife in West Palm Beach. The ghosts of the mobsters, judge, and wife have been seen roaming the halls.

In the basement dwells the soul of a maintenance worker who perished within a boiler room explosion. His screams of agony while being burned alive have been heard, and feelings of being watched and followed have been experienced.

The most famous courthouse haunting is the “Lady in White,” the spirit of a woman in a white dress. No one knows who she is or why she haunts the courthouse, but her ghost has been seen on the second and third floors.

A place as rooted in villainy and death as the Old Bartow Jail is ripe for malevolent manifestations. This jail housed Polk County’s most villainous criminals back in its day. Many were executed. Others committed suicide. And many more allegedly haunt the old building.

“The overall atmosphere of the jail is very creepy no matter if the lights are on or off,” Deputy Kimbra Wiegert says, especially of the third floor. “You have that atmosphere like there’s something up there with you. It’s definitely a very big creep factor.”

While searching files on the third floor, Wiegert claimed to have heard voices coming from the hallway. When she went outside to check, the voices stopped. No one was there.

Other deputies have had similar experiences. While one deputy was searching files, the back of a shelf flew off from across the room and nearly hit her in the head. Another deputy in a first floor holding cell felt her hair being tugged when no one else was there.

While making their rounds, deputies have seen shadowy figures in the hallways that disappear once the lights turn on. One deputy claimed to have heard someone clicking a counter as if performing head count when officers no longer use such methods.

A civilian sitting in the front lobby saw an arm reaching through a ceiling tile above him. He notified the officers, who held head count, assuming someone had escaped, but discovered no one was missing.

Other paranormal phenomenon experienced in the jail, especially on the second and third floors, include disembodied footsteps and voices, malfunctioning lights, and cold spots.

If you travel late at night to the four-way intersection of West Bereah Road and County Line Road outside Frostproof, and you park your car with the lights turned off, if you wait patiently, chances are you will discover an orb of light floating towards your car.

This “ghost light” has been reported since the early 1950s, and to this day, its source remains a mystery. Some claim the light is an optical illusion created from natural gas. Others claim it’s an apparition of Indian spirits from a nearby burial ground.

The most common explanation is that the light is the lantern of an old railroad conductor who died next to his railroad car, and whose spirit still wanders the orange groves and woods where the old railroad once ran.

Ghost Girls Inc. once encountered the ghost light during an investigation. Robinson described it as being two feet in diameter and hovering five feet off the ground.

“When we tried to get close to it, it seemed as it would move away from us,” she says. “And whenever we got to the edge of the grove, where we could really see it, it dissipated back into the grove.”

That same night, they investigated the cemetery and church grounds of the nearby Corinth Baptist Church where they heard disembodied voices and footsteps and even saw a full-body apparition. Its head, body, and shoulder could be seen hovering above the ground before forming into an orb and disappearing.

Was this apparition the same “ghost light” that appears nightly at Bereah Road? Could it be the conductor whose spirit still wanders the old railroad with his lantern? Perhaps we will never know.

DISCLAIMER: The ghost stories in this article are mostly lore and secondhand accounts obtained from Ghost Girls, the Bartow Historical Society, or the PCSO. They should not be interpreted as historically or factually accurate. Some of these locations are closed to the public. Entering them without permission is trespassing and is punishable by law. 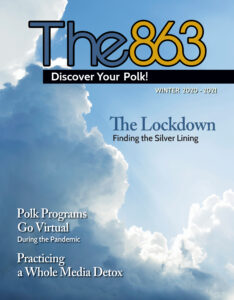