Thom Mesrobian practically cut his teeth on the footlights.

The son of the late Robert Mesrobian, a professor of opera who founded the Hattiesburg Civic Light Opera, and Janice Mesrobian, a professional pianist, Mesrobian’s career began at 4 years old when he appeared in his father’s production of “La Boheme” at the University of Southern Mississippi.

Since then, he’s worked on all aspects of live performance, including writing four plays, two musicals, and countless sketches.

“It’s a privilege to tell stories, to see people’s eyes open either to truth in those stories or when beginners fall in love with the craft,” he says.

Although Mesrobian spent seven years as a sales merchandiser and five years in Christian bookstore management, he’s made a living as an actor in Central Florida for 11 years. He’s been on stage at The Holy Land Experience, Sea World, Busch Gardens, and various Disney theme parks. These days he’s a game show host at the Florida Aquarium and a respected actor among Polk County community theaters.

Daniel Terry, who worked with him for several years at The Holy Land Experience, says Mesrobian’s serious approach to his craft results in engaging performances onstage.

“He is not only great at feeling what he is saying; he is great at getting the audience to feel the same emotions.” Terry says. “He was always able to accomplish his objective, whether he wants them to laugh, cry, be creeped out, you name it.”

But Mesrobian’s influence on the theme park extended beyond his performances.

“Before he left, Thom had a major role in redesigning the park and creating some of the more entertaining educational experiences,” Terry says. “His fingerprint is still there through his many contributions.”

Danny Baynard, a long-time community theater jack-of-all-trades in Polk County, has been collaborating with Mesrobian for 15 years. Among other projects, Baynard was in the cast of the Lake Wales Little Theatre 2004 production of Mesrobian’s original play, “Prairie Dogs.” He describes Mesrobian as talented and detailed – whether he’s writing, acting or directing.

“As a director, he knows what he wants out of a piece, but he will also take suggestions and opinions from the actors,” says Baynard. “He doesn’t leave an actor wondering what he wants.”

In describing Mesrobian as an actor, Baynard not only praises his considerable vocal talent, including singing and accurate accents, but the physical and internal elements he builds into each character.

“He develops these in great detail and that makes each character tops and alive, and he does it well,” he says.

“I admire his tenacity that he’s been able to make a living at it. He stuck with it,” Baynard adds.

“My focus has been in Orlando for the last 11 years, now I’m focusing on Polk County,” he says.

“He his very interested in finding a way to bring ‘non-traditional’ theater to a new audience,” Hartfield says. “We have worked on shows together for about a decade and he wanted to start a production company to move some of our ideas forward.”

The Mesrobians and Hartfield joined forces with Barber when they discovered she was interested in forming a local professional theater company.

“There are a whole slew of people who don’t go to the theater, but they need stories so they go to Netflix,” Mesrobian explained. “We want to go to the places where people hang out, where we can do a pop-up show, so we can say, ‘if you like this, you’d like a show at Theatre Winter Haven.’”

The company’s first show, “Moonlight After Midnight” by Martin Dockery, was held in October at the Ridge Art Association gallery in Winter Haven.

He describes the company’s productions as challenging, new, and evocative. Often they will present original material. While edgy, shows won’t be riddled with obscene language.

“We’re not seeking out plays that have objectionable content,” Mesrobian says. “There’s a problem linking edgy with dirty.”

The next project will be a rock musical that Mesrobian is writing with Orlando-based composer Ben Shepler.

“It tells the true story of a young woman in 18th century France who was a bisexual, sword fighting, opera singing superstar who fought duels dressed as a man and once burned down a convent to rescue her girlfriend from the nuns,” Mesrobian explains.

Mesrobian expects the company will stage the untitled production within a year.

Hartfield says it speaks volumes about Mesrobian’s talent that he’s equally successful as an actor, director, and writer.

“As a writer, he is insanely creative and dedicated,” Hartfield says. “If he is working on a project, it seems to appear out of nowhere in a very short span of time.”

Watching plays he’s written performed on stage is gratifying. His play, “Callbacks,” based on his experiences working in theme parks, was directed by Baynard, and performed in Tampa and Orlando earlier this year.

“To know people ‘get it’ and it means something to them, it’s a pretty great feeling, especially when I get praise from peers,” he says. “Everything I write needs to say something.”

It all goes back to storytelling.

“Regardless of background, education, income or creed, everyone has a story and it is special and sacred,” he says. For more info visit RogueStage.com. 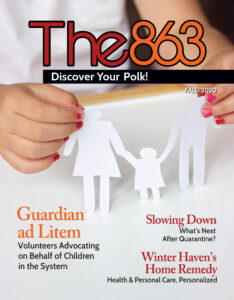 Guardian ad Litem: Volunteers Advocating on Behalf of Children in the Legal System; Winter Haven’s Home Remedy - More than a Soap Shop; Slowing Down: What’s Next After Quarantine?